A biologist signs up for a dangerous, secret expedition into a mysterious zone where the laws of nature don't apply. (R, 115 min.) 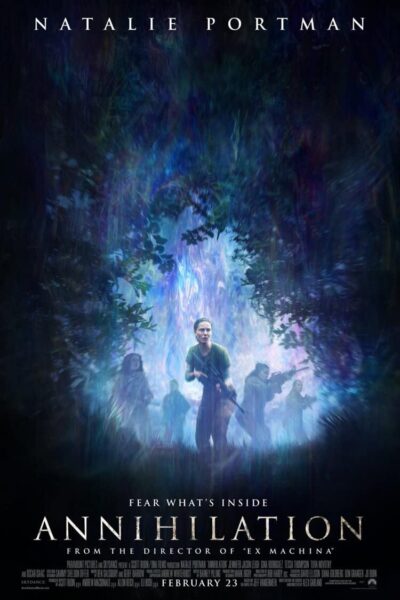 From the director of Ex Machina comes one of the year's most critically acclaimed thrillers. Biologist and former soldier Lena (Natalie Portman) is shocked when her missing husband (Oscar Isaac) comes home near death from a top-secret mission into The Shimmer, a mysterious quarantine zone no one has ever returned from. Now, Lena and her elite team must enter a beautiful, deadly world of mutated landscapes and creatures, to discover how to stop the growing phenomenon that threatens all life on Earth. Experience this visually stunning film that will be sure to leave you on the edge of your seat. [Paramount Movies]

"Annihilation is a thing of immense beauty and intoxicating complexity."

"Alex Garland’s Annihilation is a bracing blend of cerebral sci-fi and grindhouse terror."

"It’s a beautiful and haunting film, and another examination of what makes us human from Garland."

"The result is daringly original and frequently beautiful, a shimmering treat from a singular intelligence."

"A beautiful, riveting sci-fi mystery that annihilates any notion of what a big-budget studio thriller can be."

"It’s one of the most arresting, affecting science fiction movies of the last few years. It’s ambitious and haunting."

"Drawing on mythology and body horror, Annihilation is an intelligent film that asks big questions and refuses to provide easy answers. Sci-fi at its best."

"At once a gripping jungle survival thriller and an alluring sci-fi puzzle, Garland’s heady gambit confirms he’s one of the genre’s best working filmmakers."

"It’s the kind of film that leaves you dazzled and a little shell-shocked — and not entirely sure whether your own moviegoing DNA hasn’t been altered a little in the process."

"Absorbing and hypnotic, Annihilation is the best kind of sci-fi film - the kind that challenges and subverts the genre, all the while introducing new ideas that you'll see in films to come."

"Annihilation is mesmerizing and its awe-inspiring conclusion will leave your mind blown and splattered against the wall. In its final, surreal biopsychological moments the movie goes to an astonishing interstellar gear."