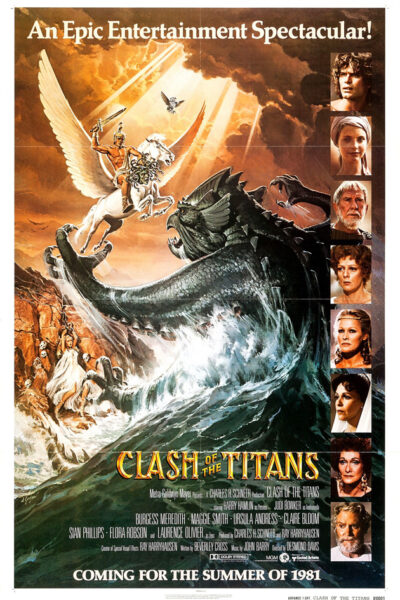 FREE SCREENING that is part of the Springfield Greene County Library “[One Read Project](https://thelibrary.org/oneread/events.cfm)”. Be sure to get there early and "dress like an Ancient Greek" for the photo booth! Admission is free. Summary: The eschewing of modern optical effects techniques in favor of the classic stop-motion animation work of special effects legend Ray Harryhausen was a delightful highlight of this action adventure that attempted to give Greek mythology the Star Wars (1977) treatment. Harry Hamlin stars as Perseus, a mortal who, due to the interference of the mighty god Zeus (Laurence Olivier), finds himself in the city of Joppa, far away from his island home. There, he falls in love with Andromeda (Judi Bowker), an imprisoned princess. To free her, win her hand, and thus half of the kingdom, Perseus solves a riddle, but Joppa's enraged ruler orders Andromeda fed to the Kraken, a towering sea monster that's the last of the powerful Titans. In his quest to save Andromeda, Perseus must endure a series of trials with the help of the winged horse Pegasus and a friendly playwright, Ammon (Burgess Meredith). His ultimate goal is to secure the head of the grotesque Gorgon named Medusa and use it to turn the Kraken into stone, but dangers await, including the hideously deformed Calibos (Neil McCarthy). [Rovi]