Follows a donkey who encounters on his journeys good and bad people, experiences joy and pain, exploring a vision of modern Europe through his eyes. (NR, 87 min.) 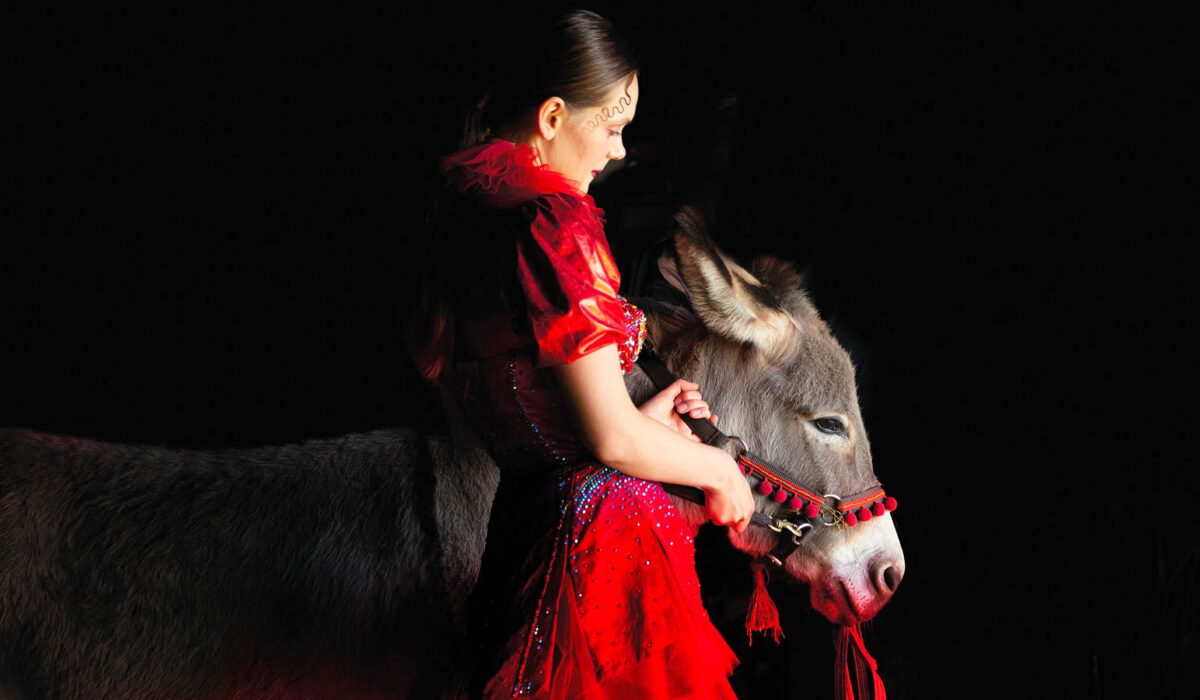 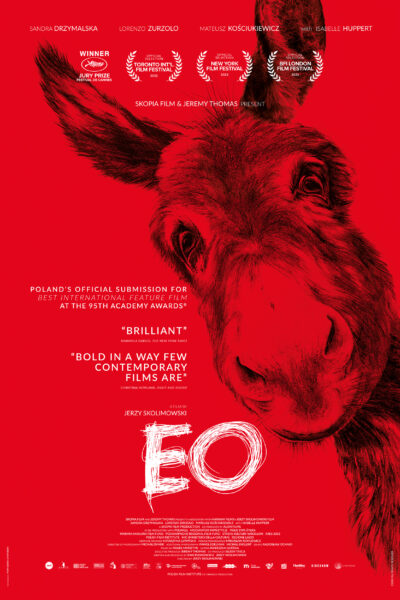 With his first film in seven years, legendary director Jerzy Skolimowski (Deep End, Moonlighting) directs one of his most free and visually inventive films yet, following the travels of a nomadic gray donkey named EO. After being removed from the traveling circus, which is the only life he’s ever known, EO begins a trek across the Polish and Italian countryside, experiencing cruelty and kindness in equal measure, all the while observing the follies and triumphs of humankind. During his travels, EO is both helped and hindered by a cast of characters including a young Italian priest (Lorenzo Zurzolo), a Countess (Isabelle Huppert), and a rowdy Polish soccer team. Loosely inspired by Robert Bresson’s Au hasard Balthazar, and featuring immersive, stunning cinematography by Michal Dymek coupled with Pawel Mykietyn’s resonant score, Skolimowski’s film puts the viewer in the perspective of its four-legged protagonist. EO’s journey speaks to the world around us, an equine hero boldly pointing out societal ills, and serving as warning to the dangers of neglect and inaction, all while on a quest for freedom. [Janus]

"EO may be one of the greatest movies ever made about the spirit of animals, as much as we can know it."

"EO is a thrillingly imaginative piece of filmmaking: a strange, haunting epic about a donkey that couldn't feel more of our moment."

"This is Balthazar as EDM remix. A punkish act of both resurrection and necromancy, EO captures the very alienating and restless pace of life at this moment in time."

"EO is a damning polemic on our relationship to other intelligent species — as free labor, food and companions — as seen through the dewy, wide eyes of a donkey whom we come to adore."

"Jerzy Skolimowski chooses an unassuming, gentle, and watchful donkey to experience the multifaceted spectrum of life, adorning Eo with more personality than any Disney special."

"A potent emotional charge, very contemporary eco-consciousness, and film-making that at its best fairly sizzles in its strangeness mark out EO as an animal film that stands defiantly on its own hooves."

"EO is a successful attempt by 84-year-old Polish filmmaker and sometimes actor Jerzy Skolimowski to both update and add color to the cinematic conversation about despair, purpose, and braying that Bresson started more than a half century ago."

"There is no more beautiful-looking film this year; shot by Michal Dymek, it often looks lit from within, glowing as softly as a lantern. And even beyond that, EO may be one of the greatest movies ever made about the spirit of animals, as much as we can know it."

"What draws us in is the inventive and luminous cinematography from Michal Dymek (with additional footage by Pawel Edelman and Michal Englert), using drone shots, fish-eye lenses and red and blue filters. Accompanied by an unsettling electronic score, the donkey-in-a-disco effect is trippy, a hallucinogenic projection of what it might be like to live in an animal’s consciousness, including its dreams and flashbacks."

"No movie that I’ve seen this year has moved me as deeply, made me feel as optimistic about cinema or engaged me with such intellectual vigor as “EO,” whose octogenarian genius auteur and all the donkeys who play EO — Hola, Tako, Marietta, Ettore, Rocco and Mela — deserve all the love and the carrots, too. EO is an astonishment and so too is this wild, boldly expressionistic movie that conveys the life of its largely silent protagonist with a bare minimum of dialogue."

"In EO, the camera doesn’t just follow the story or record the action. Its restless, exploratory movements express a kind of shared consciousness, a spirit of communion among different members of the animal world, whether they’re running together in a field or sharing the same tight enclosure. It’s the grace of this movie to extend that communion to the human beings who pass in front of the camera, and whose fates are tightly bound up with EO’s, whether they realize it or not."