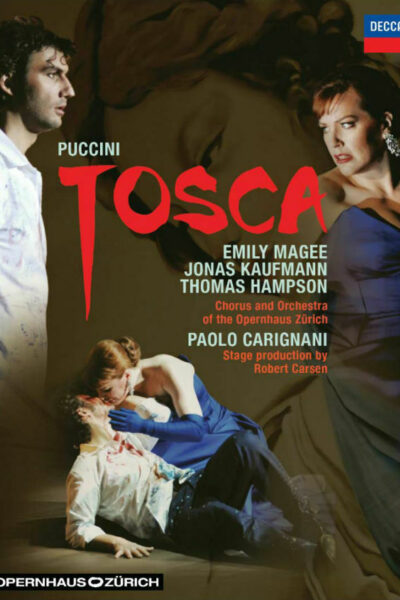 The Moxie: On Stage is a new series showcasing world class performances from stages across the globe. Tickets: $20/adults; $15/members & students This series is made possible thanks to a grant from the [Springfield Regional Arts Council](http://www.springfieldarts.org/). Production Information: Giacomo Puccini’s Tosca is melodrama at its purest, a festival of lush melodies and dramatic outbursts that remains one of this composer’s most popular works to this day. It is also a genuine “action opera,” a realistic crime story, complete with torture, betrayal, murder, sex and suicide. And in the production from the Zurich Opera presented here, it is a gripping, heart-stopping psychosexual study of three tragically and fatally interwoven figures. As rendered by Emily Magee, Tosca is the veritable incarnation of a prima donna, a striking beauty, strong yet vulnerable. Magee fully inhabits the role, casting her tender moments with her lover Cavaradossi in warm, full-bodied phrases, and her tense confrontation with the chief of police Scarpia in outbursts of raw passion. With his imposing stage presence and eloquent delivery, U.S. baritone Thomas Hampson raises the often one-dimensionally evil Scarpia to the level of a gentleman criminal and elegant seducer, who fascinates until his parting breath. Confirming his exceptional position as one of the most versatile, sensitive, warmly lyrical tenors of our day is Jonas Kaufmann as Cavaradossi. Whether indulging in playful banter, bristling with passionate indignation or glowing with romantic ardor, Kaufmann is always comfortable in his masculinity and unfailingly assured in his shaping of his part’s every nuance. The press was unanimous in praising his “darkly hued, dazzling and robust tenor … Puccini lyricism with a wealth of shadings practically unknown since di Stefano and Callas” (Badische Zeitung). Never before has the warhorse “E lucevan le stelle” been interpreted with such intimate, heart-rending poignancy as when Kaufmann bares his soul to a hushed audience in an account that makes time stand still. The lyrical outpourings and dramatic surges of this stellar trio are given flexible, sensitive support by Italian conductor Paolo Carignani, who applies all the colors of the Zurich Opera orchestra’s palette with a masterful hand. The staging by acclaimed Canadian director Robert Carsen engages the viewer in a subtle “play in a play” drama, in which theater and reality fuse together into an intelligent and revealing take on this exciting operatic thriller.