Genre: Animation Details for individual films below Rating: NR (some shorts are not appropriate for children) 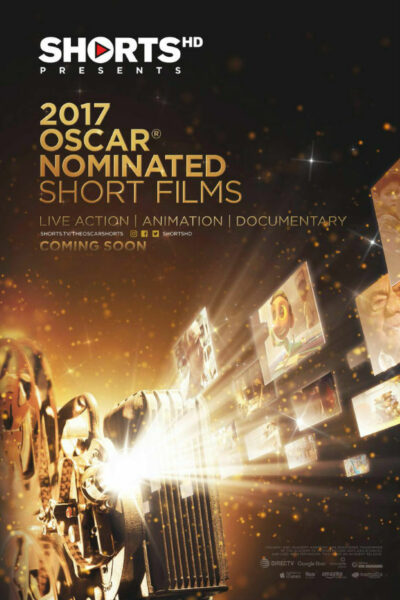 The Short Film (Animated) nominations for the 2017 Oscars have been announced! The mix of nominees for this past year’s movie season is filled with memorable films featuring some of the most talented artists in the world. [oscar.go.com] **Borrowed Time** (Andrew Coats and Lou Hamou-Lhadj) USA, 7 minutes **Pearl** (Patrick Osborne) USA, 6 minutes **Piper** (Alan Barillaro) USA, 6 minutes **Blind Vaysha** (Theodore Ushev) Canada, 8 minutes **Pear Brandy and Cigarettes** (Robert Valley) Canada and UK, 35 minutes *_This film is not suitable for young viewers. The film will be screened as the last entry in the Animated program, at the very end, and will be preceded by a parental guidance title-card._* **ADDITIONAL FILMS** **The Head Vanishes** (Franck Dion) Canada and France, 9 minutes **Asteria** (Josh Crute) France, 5 minutes **Happy End** (Jan Saska) Czech Republic, 6 minutes **Film Summaries:** "Borrowed Time" A sheriff of the Old West returns to the scene of a tragic accident from his past that shaped his life. As memories wash over him, he is engulfed by emotion and must find the strength to carry on with his lifelong quest for redemption. _Directors: Andrew Coats, Lou Hamou-Lhadj - Genre(s): Animation, Drama, Short_ "Pearl" An itinerant musician travels around the country with his young daughter in their old hatchback and juggles his passion for performing with providing his daughter with a stable life. The daughter grows up with a love of music and adventure, and is able to repay her father for nurturing her creativity. _Director: Patrick Osborne - Genre(s): Animation, Short_ "Piper" Young Piper, a sandpiper hatchling, leaves her nest for the first time to hunt for food but is too scared of the crashing waves to reach the yummy morsels hidden in the sand. After meeting an unusual ally, Piper attempts to face her fears and increase her confidence. _Director: Alan Barillaro - Genre(s): Animation, Short, Family_ "Blind Vaysha" Young Vaysha was born with unusual sight: her left eye can see only the past and her right eye can see only the future, while the present is a blind spot. Called "Blind Vaysha" by the people of her village, the girl is tormented by the two realities that she cannot reconcile. _Director: Theodore Ushev - Genre(s): Animation, Short_ "Pear Cider and Cigarettes" Hard-living Techno Stypes has been Robert's best friend since childhood, and over the years, Robert has been amazed by Techno's ability to sabotage himself. When Techno is hospitalized in China and needs a liver transplant, Robert goes on a wild ride to get him home to Vancouver. _Director: Robert Valley - Genre(s): Documentary, Animation, Short_ **Additional Film Summaries:** "The Head Vanishes" A little girl who may have lost her mind decides to take a trip to the seaside by herself. "Asteria" Asteria is a nearly-dialogueless, live-action, science-fiction/fantasy short film about a painter who's been commissioned by earth to fly across the seven galaxies in a spaceship and paint the wonders of the universe. "Happy End" A black comedy about death with a happy ending. A splendid chain of unlikely encounters. Hunters, a tractor driver, a disco boy, and a corpse.