When a simple jewelry heist goes horribly wrong, the surviving criminals begin to suspect that one of them is a police informant.
Mother's Backyard Flix
(R, 89 min.) 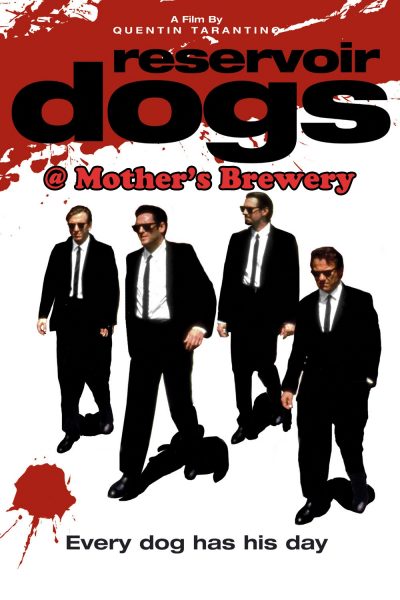 Mother's Backyard Flix
We’re teaming up with Mother’s Brewing to screen “Reservoir Dogs (1992)” in Mother’s Backyard! (215 South Grant Ave.) So bring your blankets and/or lawn chairs to ensure you are comfy during the movie. This is a 21+ event. Tickets will be on sale at the door.
Movie starts at dusk.

Summary: When a simple jewelry heist goes horribly wrong, the surviving criminals begin to suspect that one of them is a police informant. [IMDB]

"It's brutal, it's funny and you won't forget it."

"Those who survive it emerge in a shell-shocked euphoria -- so good and so blunt is the writing."

"Tarantino, in Reservoir Dogs, has made a nihilist comedy about how human nature will always undercut the best-laid plans."

"The writing is crisp and clean, providing line after line of snappy dialogue designed to leave the viewer alternately pondering and laughing aloud."

"A nod to such noir crime classics as Stanley Kubrick's "The Killing," the movie's more than savvy sensationalism. Suspense, horror and humor are expertly interwoven."

"Tarantino's palpable enthusiasm, his unapologetic passion for what he's created, reinvigorates this venerable plot and, mayhem aside, makes it involving for longer than you might suspect."

"A brash, brutal crime-caper film, Reservoir Dogs has enough raw energy for 10 motion pictures and more than enough rough stuff to traumatize the sensitive. But not only does Dogs have teeth, it has brains."

"It's extremely well-acted, written with flair and directed by a 29-year-old first-timer, Quentin Tarantino, who always knows where to put the camera, when to cut to a flashback and how to draw the best work from his brilliant cast."