The Essentials: Uncle Boonmee Who Can Recall His Past Lives (2010)

Dying of kidney disease, a man spends his last, somber days with family, including the ghost of his wife and a forest spirit who used to be his son, on a rural northern Thailand farm. (NR, 114 min.) 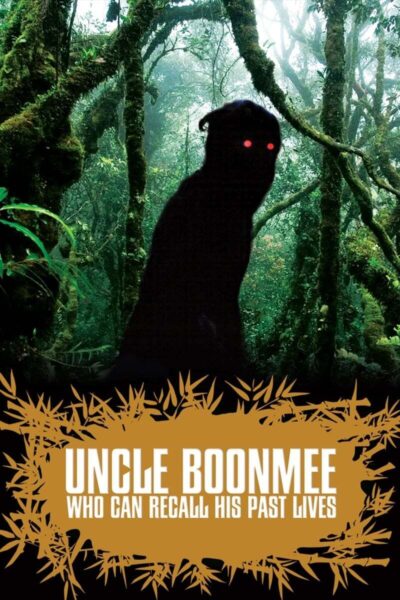 Winner of the top prize at the Cannes Film Festival, UNCLE BOONMEE WHO CAN RECALL HIS PAST LIVES is a unique tale of a man embracing life’s greatest mystery. Suffering from acute kidney failure, Uncle Boonmee has chosen to spend his final days surrounded by his loved ones in the countryside. Surprisingly, the ghost of his deceased wife appears to care for him, and his long lost son returns home in a non-human form. Contemplating the reasons for his illness, Boonmee treks through the jungle with his family to a mysterious hilltop cave – the birthplace of his first life… [Strand Releasing]

"It is a total wonderwork: enchanting, bizarre, complex, original."

"Spirit, animal, and human worlds coexist in dreamy harmony in this remarkable drama."

"A beautiful, slow-moving meditation on life, death, and relationships that transcend time and space."

"This is a visionary film in the director's characteristic style: mysterious, dreamlike, gentle, quiet, magical."

"A moving, gently reassuring tale that softens the boundaries between humanity and nature, life and the afterlife."

"As Joe blurs the line between reality and the supernatural, his haunting and hypnotic film exerts a hold you don't want to break. It's a beauty."

"The slightly muzzy, blended photography is often beautiful, and an aura of the uncanny-the spirit life entering the everyday-is strangely affecting."

"You don't have to believe in the transmigration of souls to fall languorously in love with the Thai film that won the Palme d'Or at last year's Cannes Film Festival."

"If anything, Joe's sense of dream logic is more naturalistic than Lynch's, more grounded in the knowable world - as much, that is, as we can know about nature - and the luminous Uncle Boonmee is no exception."

"Instead of nostalgia for vanished magic, there is the recognition that magic is always present if we know where and how to look. Mr. Weerasethakul certainly knows where to look and is generous enough to share some of what he sees."

"A slow-burning cinematic riddle that worms its dreamy abstractions through the likes of melodrama, comedy, horror, fable, and documentary, [the film] is a free-spirited, hypnotic masterpiece-and that's not a word to be thrown around lightly."

"As Apichatpong erases, once again, the barriers between the celestial and terrestrial, he also does away with the cordons between film genres - this is sci-firomancefamilyreligiousthrillercomedyporn. No video service has a section for that. The only suitable shelf is the one in your soul."