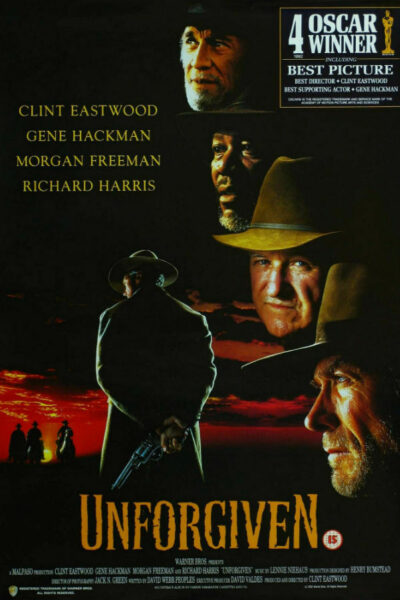 Essential Western Films This new quarterly series showcases the “essential” films everyone should see on the big screen. For each month-long program, we’ll screen five films organized by one of the following themes: directors, actors, genres, and eras/movements. Essential tickets are $9 for Adults, $8 for Students/Seniors and Members get in Free! Unforgiven (1992) is producer/director/star Clint Eastwood's own tribute to his legendary legacy in Sergio Leone's low-budget 'spaghetti' westerns, and a return to his most successful film genre - after seven years (following his Pale Rider (1985)). The R-rated film was commercially successful at the time of its release and its acting was universally praised. It also was Eastwood's first film to pass the $100 million mark. Overall, the film was nominated for nine Academy Awards and won four major ones: Best Picture (Clint Eastwood as producer), Best Supporting Actor (Gene Hackman - his second Oscar after winning for The French Connection (1971)), Best Director, and Best Film Editing (Joel Cox).Eastwood's film helped to revive the reputation of Westerns, becoming only the third Western ever to win the Best Picture Academy Award. Summary: Retired Old West gunslinger William Munny reluctantly takes on one last job, with the help of his old partner and a young man.