Four friends, all high school teachers, test a theory that they will improve their lives by maintaining a constant level of alcohol in their blood. (NR, 115 min.)
Druk (original title) 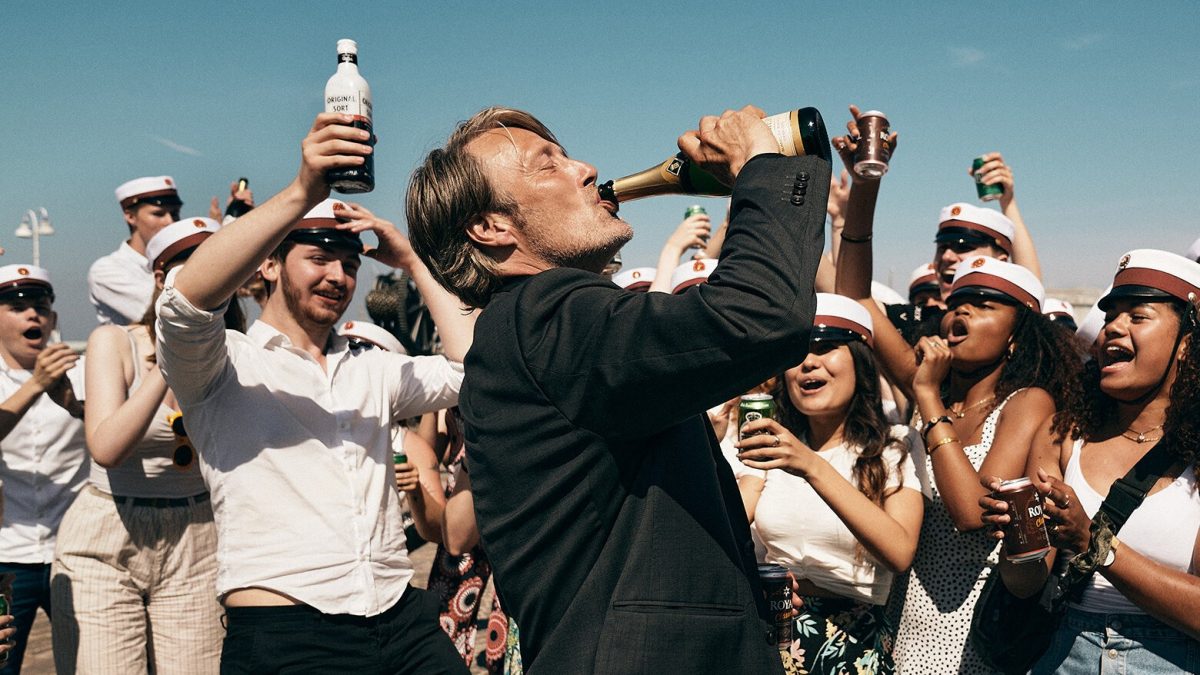 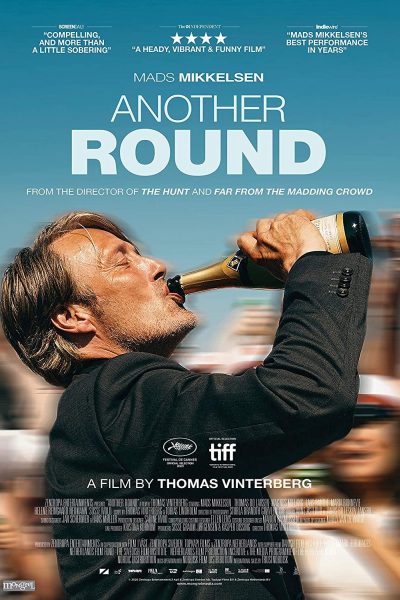 There's a theory that we should be born with a small amount of alcohol in our blood, and that modest inebriation opens our minds to the world around us, diminishing our problems and increasing our creativity. Heartened by that theory, Martin and three of his friends, all weary high school teachers, embark on an experiment to maintain a constant level of intoxication throughout the workday. If Churchill won WW2 in a heavy daze of alcohol, who knows what a few drops might do for them and their students? Initial results are positive, and the teachers' little project turns into a genuine academic study. Both their classes and their results continue to improve, and the group feels alive again! As the units are knocked back, some of the participants see further improvement and others go off the rails. It becomes increasingly clear that while alcohol may have fueled great results in world history, some bold acts carry consequences. [Metacritic]

"The cast is outstanding, with Mikkelsen leading the way in a nomination-level performance as Martin. Another Round is filled with memorable sequences."

"In a word, Another Round is intoxicating. Vinterberg elevates what could have been a mope-fest with a magnificently defiant tone and a powerhouse performance from Mikkelsen."

"Another Round is a breath of fresh air for anyone who has been starving for intelligent entertainment. It's invigorating and completely credible, thanks to Vinterberg's approach and the performances of his leading actors."

"A peak-form Mads Mikkelsen stars in this hilarious and heartbreaking spellbinder as a Copenhagen high-school teacher who thinks day drinking might sharpen his faculties. The Oscar for Best International Feature belongs right here."

"In a year when much of the world has been stuck at home, day drinking, Another Round is a welcome shot of bitters with a warm cognac chaser, and a bracing/revealing renewal of a grand Danish partnership, Vinterberg and Mads his muse."

"Vinterberg’s ending offers an unlikely sense of catharsis, even though it isn’t truly happy, turning the film into something fresh and affecting. On top of all that, the film provides the opportunity to watch Mikkelsen give perhaps his best performance yet."

"This is a movie about the joys of friendship, among many other things, and the possibility of change—for the better, not only for the worse, and not only through blood-alcohol adjustment. Drink, drinking or binge-drinking -- there's some of that too -- can't begin to convey the wild beauty and emotional depth of this film."

"While Another Round inspects the varying effects of alcohol on daily life, it’s far from clinical. Waves of ebullience, love, humor and sorrow crash on top of each other, as anyone who’s ever been overserved can attest to. It isn’t prescriptive about drinking, and doesn’t seek to impart any message other than that life is hard, and sometimes dark, and sometimes ecstatically beautiful."

"By the end, Another Round is a truly wonderful movie about trying to come to grips with life, anchored by terrific performances, infectious music, and a real understanding of the humming discontentment that all adults must learn to navigate in their own ways. It’s the sort of comedy fused with tragedy that may just best represent what life really is: a melancholy, glorious, slightly off-kilter dance."