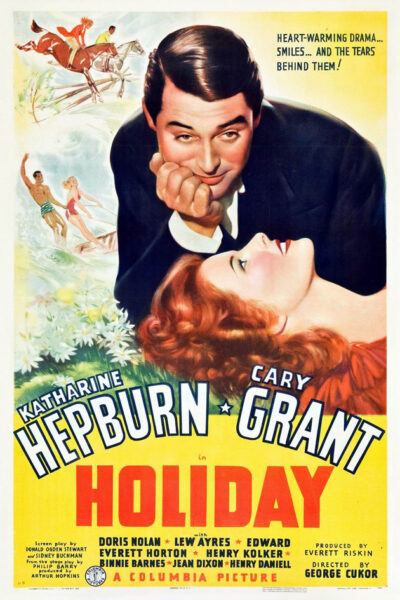 Member Picks showcases the movies that inspired the Moxie’s biggest supporters. Every month, one member picks a film that impacted their lives and we put it up on the big screen. November's pick was made by moxie member Mark McQueary. **What do you love about this particular film, and why do you want to share it with others?** _Hepburn and Grant, need I say more. They are one of my all-time favorite pairings, and this was their 3rd out of 4 movies together. “Holiday” was directed by George Cukor and is based on a play be Philip Barry. This same foursome came together again to make “The Philadelphia Story” a few years later. So many stylistic elements can be seen in “Holiday” that later appear in “The Philadelphia Story.” You can expect crisp direction, witty dialogue, and superior acting. Let’s not forget the wonderful supporting cast. Edward Everett Horton and Jean Dixon, as Prof. Nick Potter and his wife, are pure delight._ Synopsis: Both film versions of Phillip Barry's stage comedy +Holiday have their merits, but the 1938 version has the added advantage of supercharged star power. Katharine Hepburn and Doris Nolan play Linda and Julia Seton, two daughters of a very well-to-do family. Linda feels a bit lost in the shuffle as sister Julia prepares to marry self-made financier Cary Grant. Hepburn has always rebelled against her privileged trappings, and finds a kindred spirit in the unorthodox, iconoclastic Grant. On the verge of compromising his down-to-earth values with his marriage to the wealth-obsessed Nolan, Grant chooses instead to plight his troth with soul-mate Hepburn, celebrating his "liberation" by doing several cartwheels. Donald Ogden Stewart is careful to bring the pre-Depression frivolities of the Barry play up-to-date, first by changing the character of Grant's best friend (played in both films by Edward Everett Horton) from a lazy socialite to a dedicated professor, and by including several lines indicating how out of touch the privileged classes are--and choose to remain--with 1930s realities. The only element in which the remake does not improve on the original is in the casting of Hepburn's alcoholic younger brother; charming though Lew Ayres is in the 1938 film, he is still outclassed by Monroe Owsley in Holiday (1930). Katharine Hepburn managed to temporarily defray her "box office poison" onus when Holiday proved to be a success; alas, her next film, Bringing Up Baby (which reteamed her with Grant), was a financial bust, compelling her to return to Broadway--where she made a spectacular comeback in another Philip Barry play, +The Philadelphia Story.