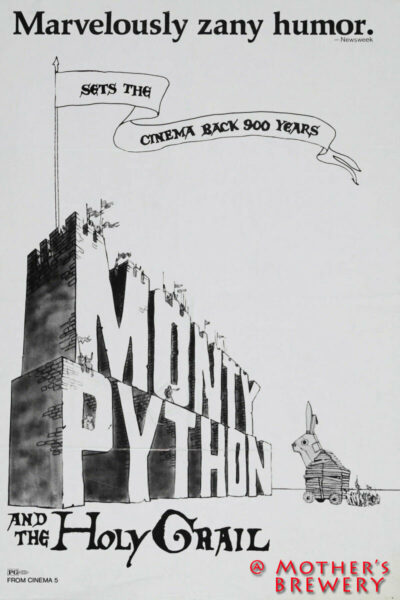 We’re teaming up with Mother’s Brewing to screen the cult classic “Monty Python and the Holy Grail” in Mother’s Backyard! (215 South Grant Ave.) So bring your blankets and/or lawn chairs to ensure you are comfy during the movie. Better yet, bring your picnic fixins so you can dine outside while watching a great movie! You can’t bring booze, but don’t worry, Mother’s has you covered on that. They will have beer flowing outside so you don’t even have to go inside for a refill during the movie! This is a 21+ event. Tickets are $5 and on sale at the door. Try to bring cash! SYNOPSIS: From its opening multi-language titles (that sure looks like Swedish) to the closing arrest of the entire Dark Ages cast by modern-day bobbies, Monty Python and the Holy Grail helped to define "irreverence" and became an instant cult classic. This time the Pythonites savage the legend of King Arthur, juxtaposing some excellently selected exterior locations with an unending stream of anachronistic one-liners, non sequiturs, and slapstick set pieces. The Knights of the Round Table set off in search of the Holy Grail on foot, as their lackeys make clippety-clop sounds with coconut shells. A plague-ridden community, ringing with the cry of "bring out your dead," offers its hale and hearty citizens to the body piles. A wedding of convenience is attacked by Arthur's minions while the pasty-faced groom continually attempts to burst into song. The good guys are nearly thwarted by the dreaded, tree-shaped "Knights Who Say Ni!" A feisty enemy warrior, bloodily shorn of his arms and legs in the thick of battle, threatens to bite off his opponent's kneecap. A French military officer shouts such taunts as "I fart in your general direction" and "I wave my private parts at your aunties." Rabbits are a particular obsession of the writers this time around, ranging from the huge Trojan Rabbit to the "killer bunny" that decapitates one of the knights. Graham Chapman, John Cleese, Terry Gilliam, Eric Idle, Terry Jones, and Michael Palin collaborated on the script and assumed most of the onscreen roles, while Gilliam and Jones served as co-directors. ~ Hal Erickson, Rovi