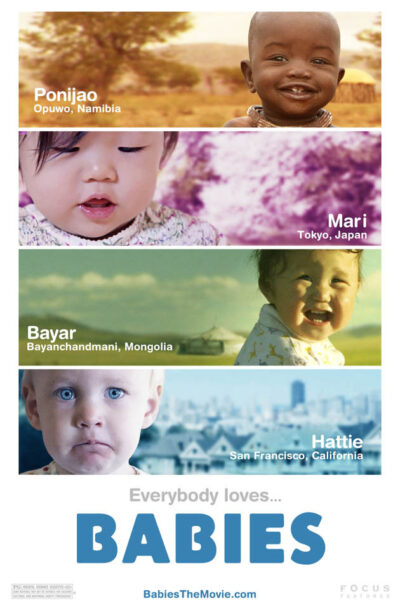 These FREE screenings are part of MOXIE FLIX, a monthly series focusing on essential films for kids to see before they turn 13. Summary: The adventure of a lifetime begins... Directed by award-winning filmmaker Thomas Balmès, from an original idea by producer Alain Chabat, this film simultaneously follows four babies around the world – from birth to first steps. The children are, respectively, in order of on-screen introduction: Ponijao, who lives with her family near Opuwo, Namibia; Bayarjargal, who resides with his family in Mongolia, near Bayanchandmani; Mari, who lives with her family in Tokyo, Japan; and Hattie, who resides with her family in the United States, in San Francisco. Re-defining the nonfiction art form, "Babies" joyfully captures on film the earliest stages of the journey of humanity that are at once unique and universal to us all. (Focus Features) A thorough, spoiler-filled Parent’s Guide can be found [here](https://www.imdb.com/title/tt1020938/parentalguide?ref_=tt_ql_stry_5).